Amines (-NH₂) are one of the functional groups, derivatives of Ammonia (NH₃) in which one or more hydrogen atoms have been replaced by Alkyl groups

Many low lower molecular weight amines have very foul orders. Trimethylamine(CH3)3N, formed when enzymes break down certain fish proteins, has the characteristics odor of rotting fish. Putrescine (NH₂CH₂CH₂CH₂CH₂NH₂) and Cadaverine (NH₂CH₂CH₂CH₂CH₂CH₂CH₂NH₂) are both poisonous diamines with putrid odors. They, too present in the rotting of fish, and partly responsible for the odor of semen, urine and bad breath.

In general, Amines are classified into three major types,
They are,
The classification is depend on the Number of Alkyl Groups Replaced in terms of the hydrogen Atoms in the Ammonia molecule.
So, Primary (1′) Amines Contains One Alkyl group in it
Secondary (2′) Amines  contains two Alkyl groups in it

The following rules are applied while naming amines,

Amines are named by naming the Alkyl groups attached to the nitrogen atom followed by the ending –amine.
The names should be written as one word.
EXAMPLES :

When two or three identical alkyl groups are attached with the nitrogen atoms,then
ADD PREFIX – di– or tri– to the name of the amine
EXAMPLES  :

In this system, an amine is named in much the same way as the analogous alcohol,except that the suffix amine is used.

In diamine nomenclature, as in diol nomenclature, the final ‘e’ of the hydrocarbon name is retained.
The Priority order of citation of amine groups as principal groups is just below that of alcohols
Carboxylic Acid > Aldehyde > Ketone > Alcohol >  Amine

When cited as a substituent, the -NH₂ group is called as Amino group.

The amine salts are named as substituted ammonium salts.The alkyl groups are named first, and are followed by ending with -ammonium. The name of the anion present in the salts is then written as a second word.
EXAMPLE :

Let us consider,
Methylamine for illustrating the orbital make up of amines.In Methylamine both nitrogen and carbon are sp3 hybridised.
one of the sp³ orbital of nitrogen is completely filled and cannot take part in bond formation.
Molecular Shape ;  TETRAHEDRAL 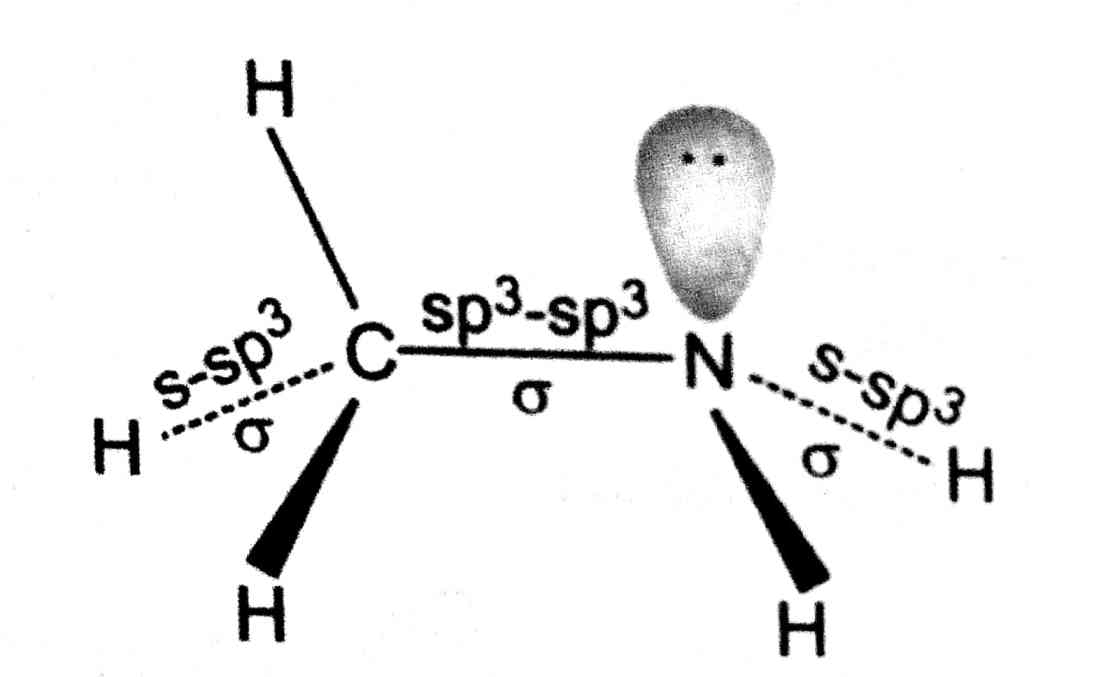 The bonding in an amine is directly analogous to that in ammonia : an sp³-hybridised nitrogen atom bonded to three other atoms or groups (H or R) and with a pair of unshared valence electrons in the remaining sp³ orbitals

first of all, you have to know about
What is Lewis base ?
Lewis Base : If a species donates an electron pair to form a new bond to a hydrogen, we can simply say it is acting as Base
Generally, when we speak about the basicity of amine, we are referring to its ability to form a new bond to hydrogen using its unshared valence electron pair. In order to consider the relative basicities of two or more amines, we need to specify a standard reaction  system for comparison,
The Equilibrium established upon reactions of the amine with water is most commonly used,

By the position of the Equilibria of the reaction, we can compare the  Basicities of various Amines

If an amine is protonated, the alkylammonium ion that forms has a charge of 1⁺. Due to this,a reasonable expectation of relative basicities of amines would seem to be :

Indeed,proton transfer to amines in the gas phase is in accord with these predictions.However,we are usually concerned with reaction in solutions,and as we have seen basicities are usually compared in terms of equilibria established in aqueous solution.
Interestingly, the order of the basicities follows no simple trend under these conditions, you can see in following image

Other factors being equal, the basicities of amines and other compounds containing an unshared valence electron pair on the Nitrogen correlate with the hybridization of the nitrogen atom. The unshared electron pair can be considered as occupying one of the hybrid orbitals, and for each type of hybridization, there is different fractions of p character.
The More p character in the hybrid orbitals, the higher will be the energy
The predicted order of the orbital energy are sp³ > sp² > sp.
So,the amine containing the unshared electron pair in the higher orbital will be acting as a more basic character.
The Bascities order of the Amines, imines, and Nitriles are

Methods Of Preparation Of Amines :

1. Reaction of alkyl halides with ammonium or amines : 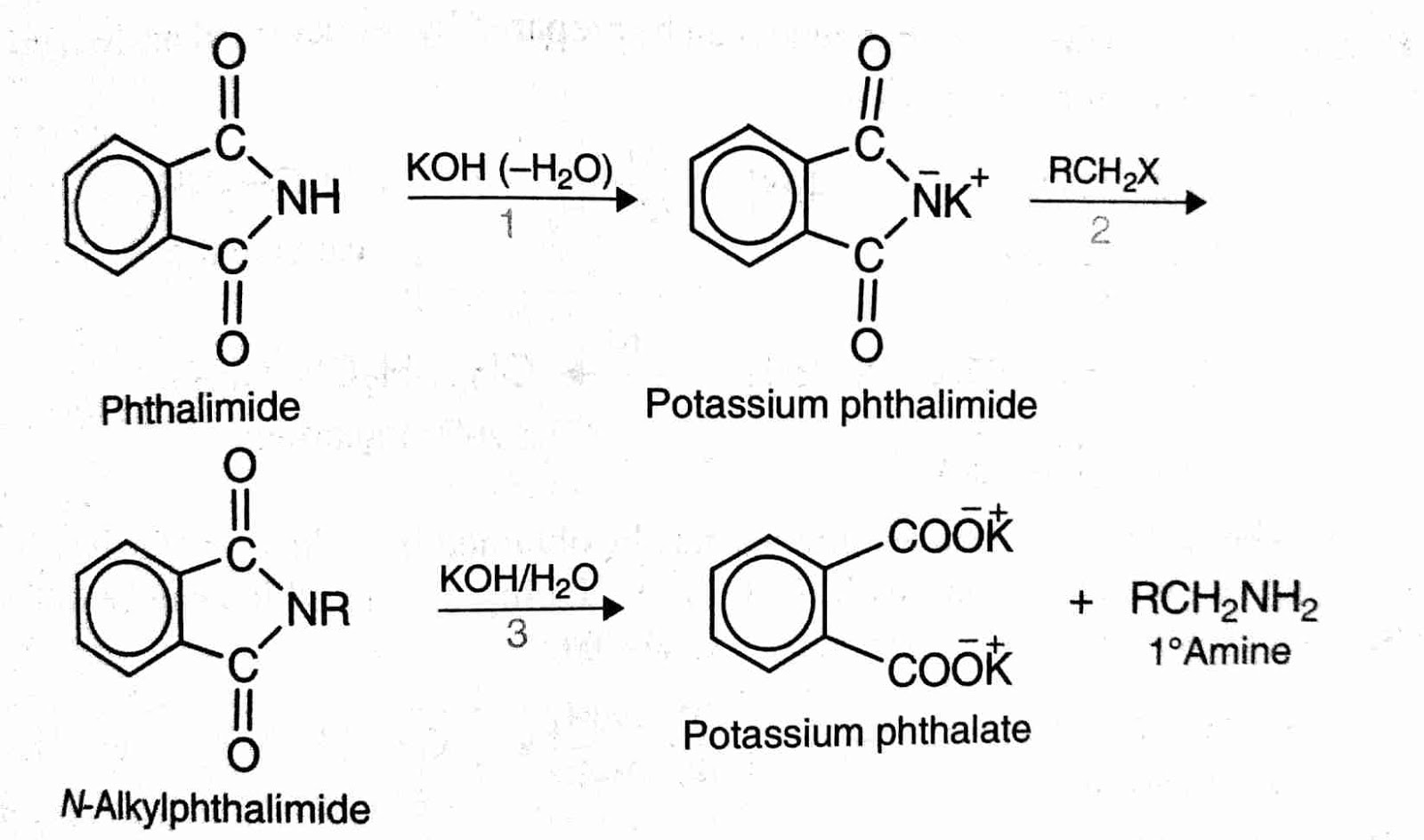 The reaction converts acyl azides to 1′ amines.Following step are involved
Step  1  :  Conversion of acid halides to acyl azides by treatment with NaN₃

The Main reactions of amines are due to the lone pair electrons on nitrogen. This lone pair of electrons is available for donation to electron-deficient (seeking) reagents. The amines generally come under Nucleophilic Reagents.

Amines are basic in nature. They react with acids to form ammonium salts
image
When these salts are treated with NaOH, parent amines are librated.

When an amine reacts with an alkyl halide, Hydrogen atoms of the N atom are successively replaced by alkyl groups. In the end, the tertiary amines add one molecule of the Alkyl halide to yield quaternary ammonium salts.

Primary amines react with chloroform and a solution of KOH in ethanol to form isocyanides (carbylamine). Secondary and Tertiary amines do not give this reaction.