Periodic Table of Elements :-
The periodic table, also known as Periodic table of elements. It is the address book of elements. The Elements are arranged here in the increasing order of atomic number. It keeps the all information about size, nature, property, behavior towards other elements, strength, weakness. However these information’s are hidden in the periodic table so we have to learn and explore those Information.
I will Explain these topic One by one,
The Secret of these information’s are lies in the subatomic particles of atom and the effects shown by those particles like Proton, neutrons, electrons.

Size of the atom :- (Across the Group)

Size of an Atom :- (Across the Period)

As you move through the Period (Row) Right to left, You can see that the number of orbit remains same but the number of electrons and number of protons are increased. This results in the Formation of Stronger Nuclear Force ( Attraction between Proton and Electron ) , It is capable of large binding of electons more closely. This results in Decrease of the size of atom.
So the element placed in the Right side of the Period (Row) is smaller when compared with element placed in Left of the same Period (Row)
When you observe the trends of atomic size across the period (Row),You will find that it is not steady as we expected. It decreases across the period (row) but when we move from the “d – block” to “p – block”  there is a large contraction in size. And again after “f – block” you will see large contraction in size of “d – block “elements
What do you think about the Reason behind this unsteady trend in size ?
So first note down the factors responsible for the contractions in the size
• Nuclear Charge/Number of Protons Which pulls electrons towards nucleus like a tiny 🧲 Magnet
• Distance between the Outer electron and Nucleus, which prevents them to be pulled towards the nucleus.
Crack Chemistry

Electrons in the inner shell can cancel some of the nuclear charge, so that the electron in the outer shell can experience the less attraction of Nucleus. This is called Shielding Effect. The Extent of Shielding caused by Sub- shells are different because every sub-shell has different structure. 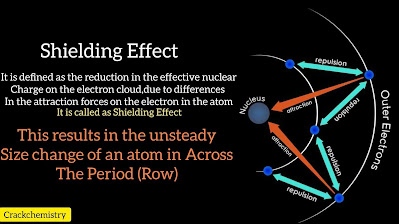