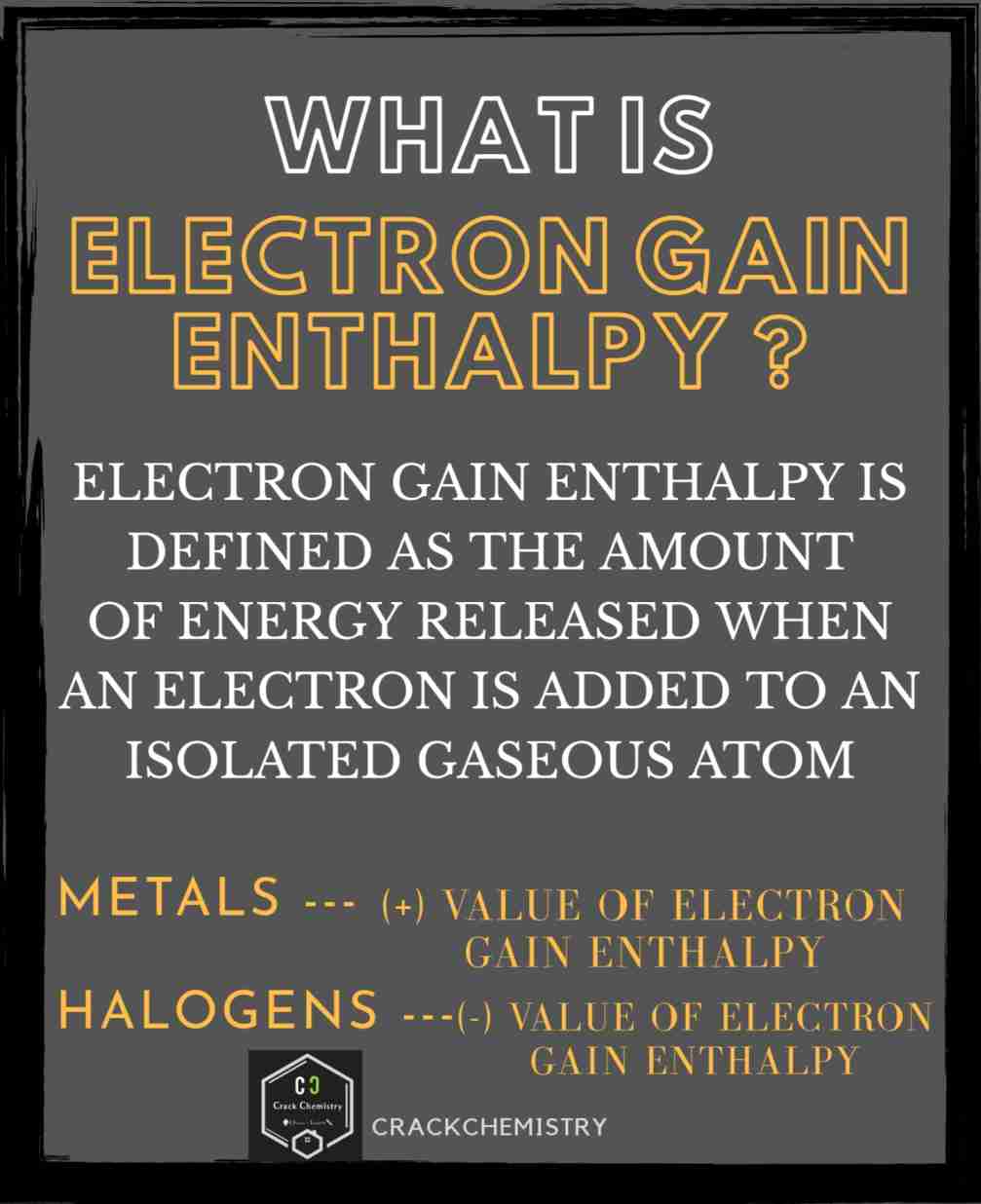 Let’s start,
You must be a Student, Learner, etc..,
So you must be known with Energy. Either something is being done or happening Spontaneously,
Energy is involved in each and every process.
Whenever you talk about business you talk about profit and loss, like that
Whenever you talk about the process you talk about the energy changes.
The energy changes in every process also in terms of profit and loss.
Similar to business profit and loss, Energy is also influenced by a various factors we have to keep those factor into constant so we can have an accurate amount of energy.
Pressure and Volume are two variables in every process, By keeping them constant we can have an accurate amount of energy
This energy is termed as Enthalpy of process. If a process is carried out in Constant pressure and volume, the energy involved in the process is called the Enthalpy of the process.

As you know, Electron Gain Enthalpy (Electron Affinity ) is the direct opposite to the Ionisation Energy

Ionisation Energy is the energy required to remove an electron from neutral atom.
In the contrast, Electron gain enthalpy is the energy required or released whenever the electron is added to a neutral atom.
Whenever the electron is added to a neutral atom, it gets support from the nucleus in the form of a Nuclear Charge (attraction force). But it also gets repulsion from another electron that presents in the atom.
This is why electron gain enthalpy is depend upon the nature of the atom as well as its requirements.
When the atom is nearly to complete its Octet on adding an electron, it will easily accept the electron. When it is beneficial for an element to add an electron, it requires a lesser amount of energy to do so, or sometimes the energy is released.
While Adding an electron,
• If the energy required means – Electron Gain Enthalpy (electron affinity) is ‘+’ve (Positive)
• If the energy released means – Electron Gain Enthalpy (electron affinity) is ‘-‘ve (Negative)
Whenever you talk about the property or quality of an element, you have considered all the factors such as

In the smaller atom orbits are arranged closely to the Nucleus as compared to the larger atom. So the Nucleus can attract the incoming electrons easily.so it requires lesser energy to accommodate an extra electron.

A higher nuclear charge can support the process by attracting the incoming electron effectively.

When going down the group (column), the size of the atom is increased so it becomes hard for the Nucleus to attract the Incoming electron.it requires a little large amount of energy while compared with elements that are present in the front of the group.
Element of Group 1st and 2nd have very lesser negative Electron Gain Enthalpy because they have to lose an electron rather than gain an electron to get their octet state.
Noble elements of the 18th group have a very high positive Electron Gain Enthalpy (electron affinity) value.it requires an large number of energy to accommodate an electron on that particular element.

When going left to right in Period (Row), the size of the atom is decreased and the nuclear charge is Increases so it becomes easy to add in electron in the element and it requires a lesser amount of energy.
Elements of Group 17th have a larger Negative value of Electron Gain Enthalpy (electron affinity) because gaining an electron will make them achieve their octet state. So they prefer an electron every time and release a very large amount of energy while adding an electron means the process is quite feasible.
The Periodic Table of elements trend of Electron Gain Enthalpy (electron affinity) is symmetrical as ionization Because the factor deciding the enthalpy is quite independent.
Hope this session helps
Crack Chemistry – Do follow