The Term “Thermodynamics” means “Flow of heat”.
It deals with energy changes in all physical and chemical processes.
while studying a chemical reaction, We focus one two important factors

So, Thermodynamics is used to know about the feasibility of an reactions

Thermodynamics Terminology : The basics of thermodynamics is start from the following term is Universe. The Universe is sub-divided into several parts,
1.System & 2.Surrounding
System : The system is defined as any specified is portion of matter under study which is separated from the rest of universe with the boundary surface. The system may be consisting of one or more substances.
Surrounding : The rest of the universe which not included in the system is called Surroundings. 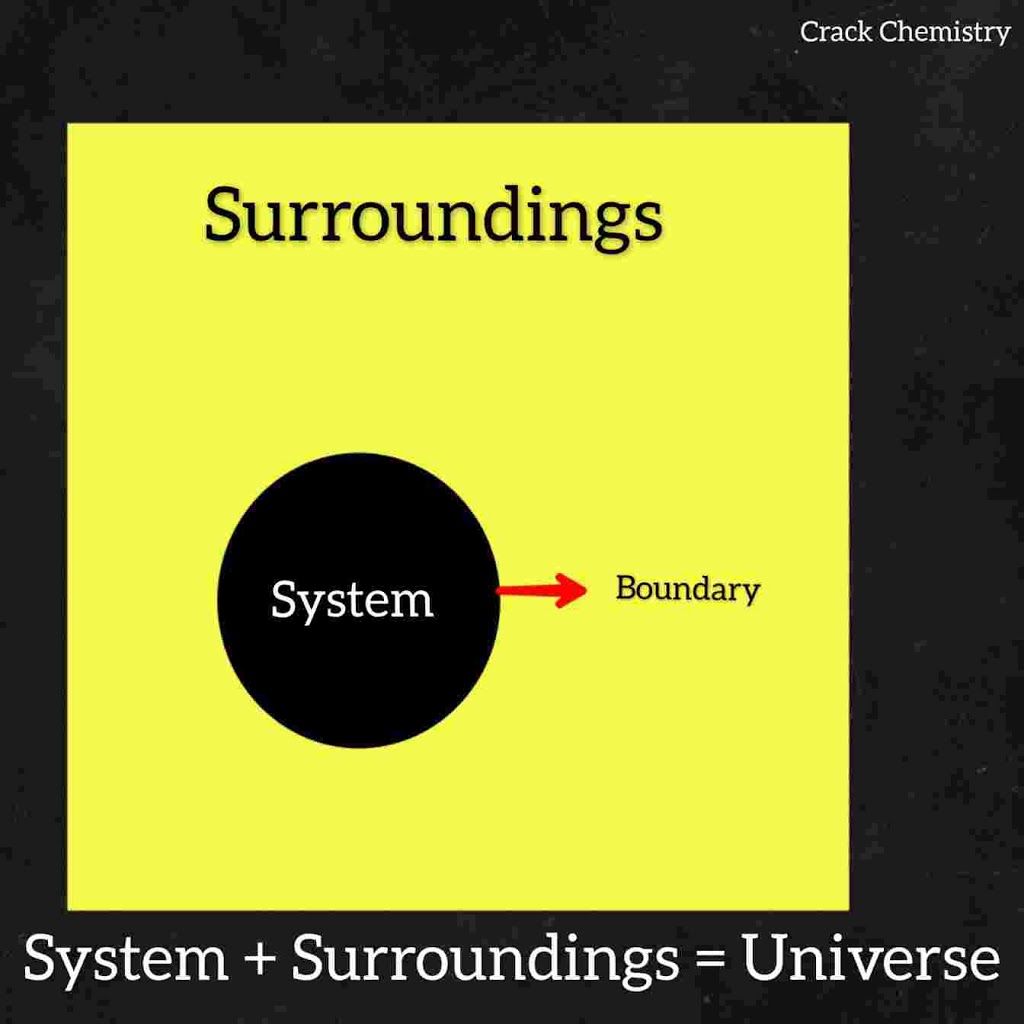 Classifications of system : The system is mainly classified into the divisions.There are,
Isolated System : The system which is not in position to share or exchange matter or energy with surround is called isolated system. [Neither energy Nor Matter is exchanged]
Example : Closed Thermal Flask
Neither temperature and amount of liquid is altered when kept in the closed thermal flask
Closed System : The system which is not in position to share or exchange matter with surrounding is called closed system.Bit the energy of the system can be exchanged with surroundings. [Not matter is exchanged]
Example : Closed Water Bottle
The temperature of the Closed water bottle can be changed.But the amount of the water present in closed water bottle remains the same.
Open System : The system which is in the position to share or exchange matter or energy with surroundings is called as Open system. [Both energy & Matter are exchanged]
Example : A cup of milkshake.
Both temperature and quantity of a cup of milkshake can b easily altered.
Macroscopic Properties : Properties of system consisting of large number of particle.
It can be pressure,volume,temperature,composition,density,viscosity,surface tension,refractive index, etc..,
The state of a system is well described by the macroscopic properties.When macroscopic property of an system have an definite value, system is said to be in fixed state.Whenever there is one change in the Macroscopic property the system state will be changed into another state.
State Variables  :  When the system changes to one state to another state. [Initial to Final].There is invariably a change in one or more Macro properties..These macroscopic variables are state variables,this can be pressure,temperature,volume,mass and composition.
Some State variables are interdependent.So no need to specify all.
In case of ideal gas  [PV = nRT] or 1 mole.
P,V,T  is known as State variables.
If two of them known, 3rd can be calculated.
Extensive & Intensive Properties :